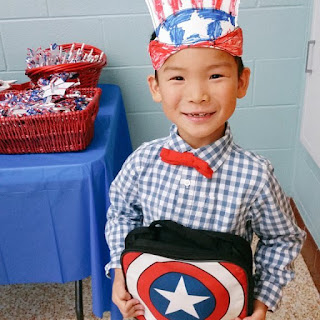 I'm in a ton of adoption Facebook groups and I see many people who adopt school aged children who struggle with school issues. I wanted to share our story since Liam's first year of school just ended.

We live in a pretty normal Texas school district. I went to elementary, intermediate, middle and high school in this district and have always been proud of our schools. They took a pretty average student and helped me get an academic scholarship to an exceptional private university and I was very prepared for college. My 3 biological kids have gotten a great education so far and I had no reason to doubt the same would happen for Liam.

I've seen a few parents on these Facebook groups say that they went in the first time to register their child for school with guns blazing prepared for war. That's just not me. I assume that the vast majority of teachers and administrators in the public school setting are there not for the fabulous paychecks but because they love kids. I don't go through life assuming everyone is out to get us because that hasn't been my experience in life. I walked into our neighborhood elementary school in July to register Liam for school armed with a stack of Chinese and American documentation. Our principal immediately said, "I know those red books!" and explained that her two girls were adopted from China. I breathed a sigh of relief knowing that we were off to a great start. I had also set up an appointment with our school counselor a few months before to go over both the struggles that I was anticipating for Liam but also some other issues we saw coming for our family and she reassured me that everything was going to be fine.

When I did the pre-registration online, our district allowed me to put Liam in 1st grade despite the fact that he was 7 and 1/2. I felt that 2nd grade was just going to be too much for him with the language issues. Liam's principal let me handpick his teacher this year. I asked for a 1st grade teacher that we had previously had for one of our biological kids. I knew that she supported our adoption because she bought one of our fundraiser shirts and she had a nurturing, patient personality.

Liam seemed unsure about starting school but he is a brave kid. He had not been allowed to go to a regular Chinese school like some of that other children at the orphanage but he had attended class in the building. I'm still not exactly sure how much he learned but I know he was used to learning songs, numbers, colors, and other preschool concepts. The first few weeks of 1st grade were seemingly tough. He had only come home around 8 weeks before school started so his English was very limited. It seemed that he went through his hierarchy of needs and started with needing to know he had access to water and the bathroom. Evidently, he exercised that cycle of drinking and potty breaks often. I think he just needed to know that it was accessible to him. For my part, I tried to keep his lunch comforting and familiar. We made sandwiches for our bio girls and sent him rice, noodles and soup because that's what he likes.

Here's where I start bragging on our public school. There was a day where his teacher was struggling to communicate with him and emailed the district ESL coordinator across town. Within 20 minutes, that coordinator was in her class. Liam received daily ESL instruction both in his class and in the ESL room. He also received extra help from the reading specialist and social skills help from the counselor. Liam was a very high functioning kid in a special needs orphanage so he needed to learn some lessons about winning/losing, taking turns, etc.

I'm not saying it was all sunshine and roses. He had some struggles learning how to deal with other kids and communicate in a new language. Honestly, though as a former mother of all girls, this probably wasn't outside the norms of an average 7 year old boy.

So here we are as he has completed his first full year of school and he's made such amazing strides. He was voted the top boy in his class by his classmates. He is reading! He is speaking fluent English (until you ask him why he is buying so much ice cream with his lunch account...totally loses the ability to speak). He made it through a field trip, school carnival, field day, and holiday parties. My husband just had an "end of year" meeting with his team of teachers, administrators and staff and he is actually doing above grade level in math. He still has some catching up to do in reading and writing but he is getting there and I know he will catch up. Almost most importantly, he has made friends and he loves going to school. He gets grumpy on school holidays and I'm going to try to keep him busy over the Summer. If we go to school events, it's like walking in with a celebrity. Every teacher and student has to stop and say hi to him. One of our daughter's teachers has to get her "Liam hug" every morning.

I'm looking forward to seeing what amazing work he is going to do in 2nd grade!