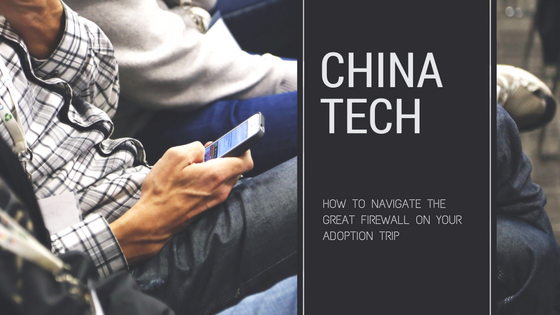 I see many families about to travel to China struggle with how to navigate the technology challenges and thought I would try to help from some things I've learned. Thankfully, I have built in tech support with my amazing IT husband.  I've learned a lot from him and hopefully this will keep you in touch with everyone back home.

First of all, we should discuss why technology is an issue. China does not have the freedom to use the internet the same way we do in America. Many sites are blocked and that list seems to grow each year. Google, Facebook, Blogspot, Twitter, Instagram, and YouTube jump to mind but many email systems (including Gmail because it is part of Google) are also not accessible.

The way around this is to use a VPN. VPNs are Virtual Private Networks and basically tunnel underneath a firewall and make it seem like you are using the internet by wherever you connect to. China obviously knows about these loopholes and has blocked many of these so check with people who have recently traveled to see which VPNs are currently working. You also must have these installed before you leave. You can usually pay a monthly fee to use this service and then cancel it as soon as you come home (I post a date on my calendar to remind myself). VPNs are also important because of security. I would not connect to the internet at all without one. I know of someone who logged on to the hotel's WiFi in China without a VPN and had their PayPal account hacked. This is definitely not something you want to deal with while adopting.

I've seen many people debate how many and which devices to bring with them when they adopt their child. That depends on each family and how much they plan on using them. We took 2 laptops, an iPad and 2 phones. The iPad was mostly for our new child to play on and I pre-installed some games that I thought he would enjoy. He was 7 at adoption and really liked PBS Kids and a game called Grandpa's Workshop. My husband took his laptop to work on the days we had some down time. I took my laptop so we could upload pictures and blog our journey. Many people would be fine with just taking a phone and either a tablet or laptop. Just make sure you have a VPN on each device loaded before you head to China or you will not be able to access the sites I mention above.

The only tech purchase I recommend is a portable/travel router.  We chose the HooToo Nano from Amazon because of price and reviews. These devices are great because the hotels we stayed at had both wired and wireless internet. The WiFi was very weak depending on where your room was within the hotel. Using a travel router allows you to plug in to the hotel's wired internet and have a stronger signal. It makes a little WiFi hotspot with the hotel's internet in your room so you can connect all of your devices to that with a more reliable signal. I believe that we were also able to run the VPN through the HooToo so that we could connect as many devices as we wanted. Usually, VPNs limit the number of connections depending on the provider.

There are a variety of options you can choose with your phone. I kept my phone in airplane mode the entire time we were in China and only used it on WiFi at the hotel. This does limit your ability to communicate so check with your phone provider on their international plan options. Most of them will allow you to buy a temporary international plan with a certain number of minutes, internet data and texts. There is also the option of getting a Panda phone where you rent a Chinese cell phone. You can have it shipped to your home or delivered to your hotel in China.

To call or text on WiFi, you also have a host of options. WeChat is China's instant messaging app that isn't blocked by their firewall. You can set up a WeChat app profile and be able to text anyone in the US or China with an account without connecting first through the VPN. You can usually also use FaceTime without a VPN. I like to use my VPN and text or call through either Facebook Messenger or WhatsApp (another WiFi based texting app). It appears that with Android's recent update, you now have the ability to call or video chat on WiFi like Apple's Facetime.

Another debate I've seen is about how large or expensive of a camera to take. As photographers, this was a debate we also had because we didn't want to lose a large, expensive camera we need for weddings due to breakage, etc. Thankfully, we kept it with us the whole time and had no major issues. I'm glad we had a quality camera with us because of the importance of the trip but you can definitely make it with a smartphone with a decent camera if you are worried about it.

In regards to plugging devices in, there seems to be a great variation of power sources depending on the hotel. Some have American style outlets and even USB ports but I wouldn't count on that.  I would plan on taking some converters/adapters. This website does a great job of explaining why you need one. I really only needed one for my flat iron but since that was very important to me, I'm definitely glad we had it.

Finally, the laws about flying with external battery chargers in China can be tricky. I had one in my carry on the first time and had it confiscated. I tried to keep it in my checked bag the second time and it set off an alarm and they told me to keep it in my carry on. My advice is to only take a cheap one you can afford to lose. I took one from Five Below (discount store) the first time and I didn't cry over losing a $5 item. The second time we took some we got as a giveaway at a baseball game so no big loss if we had it taken. I do like having one in case I'm out all day and my phone is drained.

Let's talk streaming. Netflix has blocked VPNs so I was in the Middle East this Spring and could not use a VPN to get into my Netflix account. Amazon Prime worked great with my VPN. The reality is though that many hotels will not have strong enough signals for streaming but it may be worth a shot depending on your hotel. Most airlines with WiFi (which will cost you) will tell you up front that they cannot stream but you can surf the web. They may have certain movies though that you can watch from their site or on your seatback. I would not count on being able to stream a lot during your flights or while you are in China. It looks like China is easing up on their in-flight rules about using electronic devices finally so you should be able to use a tablet or phone for the entire flight. Just listen to the instructions and always remember you are a guest in their country and be respectful of their rules.

Hopefully, this helps you be prepared for the technology challenges in China and stay connected. We took one resealable bag with all of our chargers, routers, adapters, etc in it and stayed very organized. Happy travels!