Easy to Say No

Most of the posts here are written by Sarah but this one is from Jeff's heart. 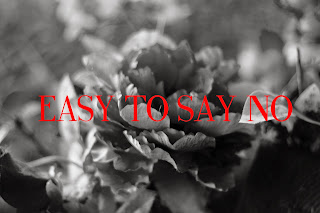 How many of us have most of our days planned? How many of us get up in the morning on any random day and know pretty much how that day will go? Sure there’s always the unexpected person who cuts us off in traffic or maybe we vary up the Starbucks order occasionally, but for the most part our days are pretty predictable.

By all these things, I have shown you that by working in this way we must help the weak, and remember the words of the Lord Jesus that he himself said, ‘It is more blessed to give than to receive.’” Acts 20:35 (NET)

These are just a few things the Bible says about serving. In fact, serving is the reason Jesus came.

Even as the Son of Man came not to be served but to serve, and to give his life as a ransom for many. Matthew 20:28

For people with entrepreneurial spirits like my wife and I have, it’s even exciting to plan fundraisers, design t-shirts, create websites, and all of the other things that go along with setting up what equates to a small business.
But like most things, there is another side…adoption is hard.

While a lot of adoption is exciting and fun, it’s also a lot of work. Just today we were talking about all of the work that we still have ahead of us. It seems like we've already accomplished so much. And then we get an email outlining the next stages and it feels like we've hardly begun. It can be disheartening. It’s overwhelming. It’s work.

Moreover, we chose this. We aren't getting paid to adopt. We aren't doing this for ourselves. It would have been much easier to say, “No.” And we would have had every justification to do so. No one would have blamed us or even known that we had ever entertained the idea.
“It would take away time from our kids.”
“Our jobs are too busy.”
“It’s too expensive.”
“It’s just not for us.”

All of those are justifiable reasons to not have agreed to adopt. For many, those are very good reasons. We are all called to help widows and orphans. Certainly adoption is a very “right” thing to do. But even adoption isn’t for everyone. The reasons I mentioned and many more are good reasons for many to not adopt. There are many ways to help orphans outside of adoption.

But for my wife and me, we examined our life and recognized that these were just challenges. None of these excuses really held up as showstoppers. So we decided to accept the challenge. We decided to go outside of our predictable life. We decided to go through the work, to spend the money, to pray and hope, to trust that if God called us to do something, His plan is better than ours.

And let us not grow weary of doing good, for in due season we will reap, if we do not give up. Galations 6:9 (NLT)

Maybe adoption isn't what you are personally called to do. That’s OK. But we are all called to do something. Have you taken time to think about what that something is? For you, it may be something simple. Maybe your thing is to pay for the next person’s coffee or to serve at a soup kitchen a few times a year. Maybe it’s to get involved in your community or cutting grass for elderly or disabled people.

Or you may be called to do something that seems so much larger than yourself. Don’t neglect to seek out what your thing is out of fear that it may be something big. Don’t let fear keep you from whatever that thing is, big or small. Don’t let the challenges become excuses.
It may be immensely easier to say, “No,” but accept the challenge and say, “Yes.”