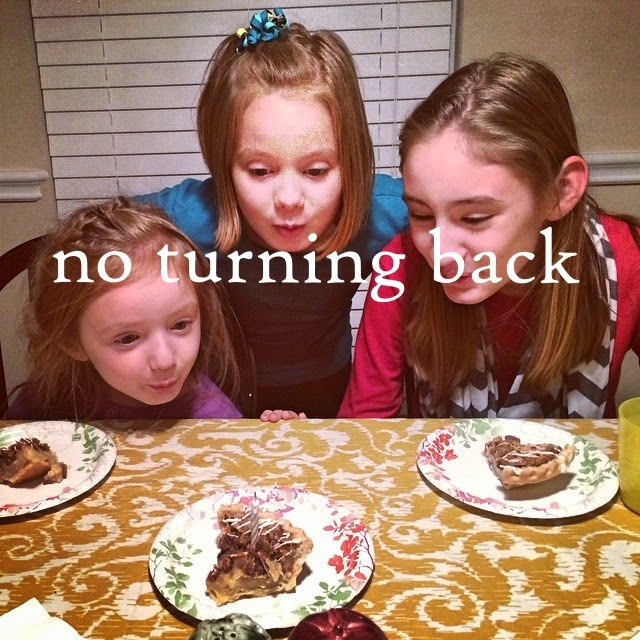 I was reading my daily devotional from "Heart of the Matter" and the verse of the day was from 1 Kings 19.  I was supposed to read the first 9 verses about God comforting Elijah in the wilderness but I kept reading. The last 3 verses of the chapter were about Elijah calling Elisha to be his assistant and they blew me away:


19 Elijah left and found Elisha plowing a field with a pair of oxen. There were eleven other men in front of him, and each one was also plowing with a pair of oxen. Elijah went over and put his own coat on Elisha.[f]
20 Elisha stopped plowing and ran after him. “Let me kiss my parents good-by, then I’ll go with you,” he said.
“You can go,” Elijah said. “But remember what I’ve done for you.”
21 Elisha left and took his oxen with him. He killed them and boiled them over a fire he had made with the wood from his plow. He gave the meat to the people who were with him, and they ate it. Then he left with Elijah and became his assistant.
1 Kings 19: 19-21 CEV

That last verse just hits you.  Can you imagine spending your life working in the fields, going out to plow one day and by that night you are boiling your oxen on top of your plow? That's commitment.  That's saying, "Hey guys, come on over for a BBQ! What am I cooking? Just my livelihood. But I'm going with this guy!"

Yesterday felt like that to me a little.  I didn't kill any livestock but I thought about the picture I posted to Facebook of my girls blowing out their future brother's birthday candle.  I have told these girls that this adoption is happening and they believe it. There were moments contemplating celebrating Liam's birthday where I thought, 'What if he never comes home to us? What if I'm filling my girls' with ideas that they are going to get a brother and it never happens? What if I guide them to loving a child on the other side of the world and they never see his face. What if all these people give us money and we never go to China and get him?'

It happens.  Adoption is dangerous.  Countries shut down the process at the drop of a diplomatic hat. Ask families that were in process in West African nations when Ebola broke out.
Ask families that were in process in Ukraine or Russia when those nations' adoption policies changed.
It has happened in places due to natural disasters, coups, or just strained relations with the United States.

Instead of lighting my oxen on fire over my plow, I light a birthday candle and sang for a child I may never hold again. I choose to believe that no matter what happens, if God shuts a door, it is His door to shut. I choose to live a life that doesn't put emotional, financial or physical security over His calling.

I want to be like Elisha and when God calls, I'm ready to answer and like any good Texan, I'll throw some BBQ for my friends while I'm at it. And yes, that's a buttermilk pecan pie we are eating in the picture instead of cake. I hope Liam likes pecan pie.