We have a son!

So here we are in China. It has been a whirlwind since we arrived in Beijing. We had a couple of days of sightseeing and then off to Liam's province.  There are six families in our travel group but only one other going to our province and it is nice to have the company.  We arrived in Xi'an around 11am on "Gotcha Day" and went to our hotel to settle in to our new environment. We exchanged our money in the hotel lobby which felt like the beginning of an episode of Locked Up Abroad. Then before we knew it, it was time to head to the Civil Affairs office.

We came in and just hung around nervously for about 10 minutes when we heard voices coming down the hall. Before we knew it, we saw one little kid come in and then Liam quickly followed. It was like seeing a celebrity in person. You can't believe your eyes because he is really right there!!

He seemed hesitant so we just told him in Mandarin that it was okay. He eventually sat in my lap and just seemed overwhelmed with emotion. He was doing his best to keep it under control but a few tears rolled down. He just breathed hard through it and did his best. This continued for about 20 minutes. It seemed to get a little worse and Jeff looked up the Mandarin word for "brave" and he said it to him and looked him straight in the eye. At that moment, all the tears stopped and he seemed okay. It was like he needed a dad to tell him how brave he was being and he knew he was going to be fine.

We signed a few papers, I think promising that we wouldn't let him wander off in the next 24 hours and then we answered some questions about why we were adopting. We stopped in to a baby and kids store for the other couple with us to get some diapers and Jeff showed him a little metal sports car toy and we saw his first smile. We bought him the car and we headed back to the hotel. We played with his car and just started figuring this cutie out.  Jeff and Susannah got Chinese takeout from a place nearby and he ate everything in sight.

He slept well last night and then had a big breakfast. He got a little sick in the car on the way back to complete his adoption this morning but I think the traffic and driving would do that to most people. Thankfully, as a mom of several with carsickness, I was prepared.  We got through all the paperwork and stamping his hand and our thumbprints and got back to the hotel where we have been playing and becoming a family.  He overall is doing so great. We are managing the communication barriers pretty well and he is very bright.  He knows and can write his numbers 1-10 and can copy his name in English. He knows his shapes and can do a 36 piece puzzle by himself. He likes Legos and playing on the iPad.  He is calling us Mama, Baba and Jie Jie (big sister) and calls himself the Mandarin word for "son".

Continue praying that we keep adjusting well.  He is an amazing little guy and we are super blessed! 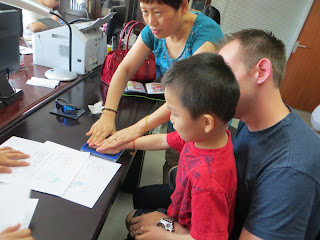