I realized looking back through this blog that I never really talked in detail about Liam's health. In fact, I wasn't even 100% sure what his diagnosis was until we got him home and to a cardiologist. When I met him in 2014, he was listed as having VSD and ASD; 2 common heart defects. Then we got his full medical chart and I could see that he actually had been diagnosed with CCTGA (aka L-TGA) which is Congenitally Corrected Transposition of the Great Arteries. It is a more rare variation of TGA where, as his cardiologist explains it, "two wrongs made a right" and while his arteries are reversed so is the bottom half of his heart.

So hey, what's the problem right? Two wrongs made a right! Except that you are asking the weaker atrium to do the harder job. And usually CCTGA comes along with other issues and in Liam's case he has some valve weaknesses and pulmonic stenosis. Currently these issues aren't bothering him, he appears as a healthy, active child and he is not on any medications and has never had a surgery. The future though is unknown. The most likely scenario according to our cardiology team is that we will probably leave the "backwardsness" of his heart alone and just repair the valves down the road. There are people who have lived long, healthy lives with CCTGA with no interventions.  Could he one day need multiple open heart surgeries? Maybe. We don't know.

What I do know is that we love the stuffing out of this kid. He's beautiful and perfect to me. I don't know that any earlier intervention in China would have made any difference to how he's doing now. I wonder constantly what his first months of life were like and what the doctors even thought without the types of tests he's been able to have performed in America. Hopefully, someday I will have some of those answers but no matter what is left unknown, God is writing a beautiful story in Liam's life. He is an unbelievable blessing.

His English is coming along great. So great that the other day he looked as his sister (who is only 14 months older) and said, "You know what? You're not funny!" Maybe this doesn't sound like a miracle but it means he's able to be a little stinker in English. He constantly makes us laugh. He loves to be involved in whatever we are doing and he is eating a ton. Things still are new for him. He had his first jelly bean and had no idea what to do with it. He met the Easter Bunny and was a little confused. But everyday, he is weaved deeper into our family and deeper into our hearts. 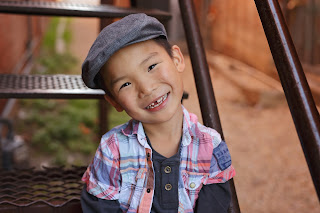